Libya’s Foreign Minister, Najla al-Manqoush called on all foreign forces and mercenaries to leave the country as soon as possible. 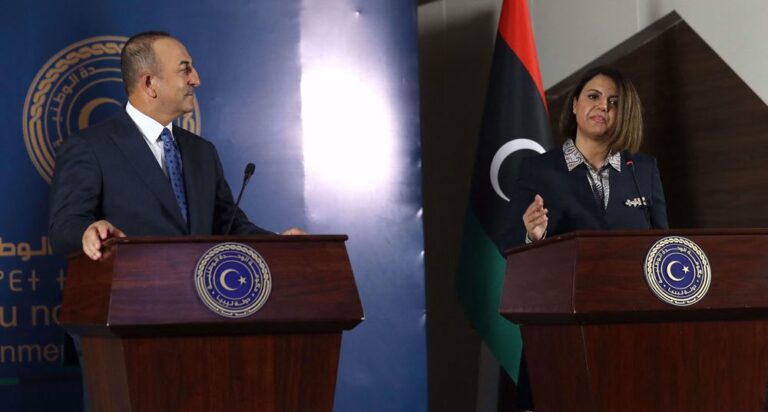 She was speaking at a press conference in Tripoli, alongside Turkish Foreign Minister Mevlut Cavusoglu.

She urged Ankara to implement UN Security Council resolutions demanding the repatriation of more than 20,000 foreign fighters and mercenaries from Libya.

“We call on [Turkey] to take steps to implement all the provisions of … the Security Council resolutions and to cooperate together to expel all foreign forces and mercenaries from the Libyan territories,” al-Manqoush said.

Turkish FM Mevlut Cavusoglu visited Tripoli along with Defence Minister Hulusi Akar and other top military and intelligence officials.
The remarks were seen as a rebuke to Turkey, which has deployed troops and Syrian mercenaries to fight along with Tripoli militias since forces of eastern-based military commander Khalifa Haftar launched an offensive to wrest control of the capital their attack in 2019.

Cavusoglu responded by saying that Turkish forces were in Libya as part of a training agreement that was reached with a previous Libya administration.

“We attach importance to preservation of Libya’s integrity, sovereignty, independence, and political unity,” he said. “In the face of the attacks on Tripoli, the legitimate government of Libya invited some countries, including us. Only Turkey replied in the affirmative to this call,” he continued, saying there are some parties that sought to equal Ankara’s presence with that of foreign mercenaries that are in Libya for monetary gain.

He further said that Turkey’s support for Libya, under a deal on security and military cooperation signed in late 2019, “avoided Libya sinking into civil war.”

“Our support has opened the way to a ceasefire and the installation of a new unified political executive,” he claimed.

“Our Strategic Partnership is developing in every field including defense, security, trade and energy,” Cavusoglu said.

Ankara will not let go of the bone that is Libya’s EEZ and ground resources, especially since it has signed agreements with the previous administration.

Cavusoglu’s claims of support appear as a sort of veiled threat that attempt to show the new Libyan interim government that security and relative normality can quickly vanish if Ankara’s interests are hampered.