Late into the overnight hours Israeli warplanes are pummeling the Gaza Strip, following accusations that Hamas deployed incendiary balloons into southern Israel earlier on Monday, which reportedly caused up to a dozen fires. 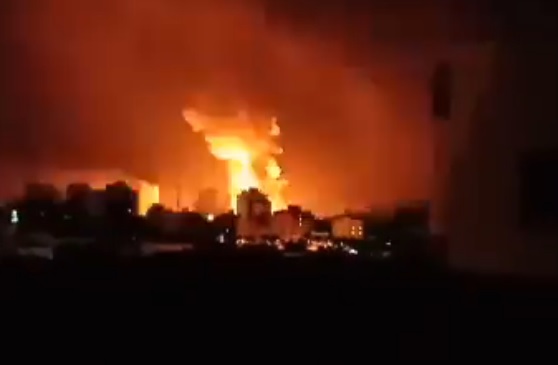 So far sites in Gaza which been hit in the Israeli raids include Jabaliya, Zeitoun, Beit Lahiya, and Hamas’ Qadisiyah site, west of Khan Yunis.

After the strikes began around midnight, the bombardment was sustained for at least an hour and appear to be continuing.

Israeli media has said defense officials in Tel Aviv are bracing for potential major escalation: “Israeli security officials believe Israel and Hamas are again on a collision course in Gaza, as the terror group encourages further violent protests along the border, Channel 12 news reports,” The Times of Israel writes.

Tensions have been soaring since the weekend, when Israel’s military charged Hamas with staging “border riots”.

On Saturday the IDF military spokesman described that “An Israeli Border Police soldier was critically injured by live fire from Gaza and is currently receiving medical treatment at a hospital.”

Another angle of the incident on the Gaza border shows a Palestinian apparently shooting with a handgun through the hole in the border wall, before the others try to snatch the IDF soldier's rifle. pic.twitter.com/ko69mHH4QW

The incident, which led to Israel bombing what were described as “Hamas storage sites” starting Saturday evening, was caught on video, with the footage widely circulated.

Israel and Gaza could be once again headed for a major flare-up in fighting, akin to the last conflict over an eleven day period in May, which resulted in at least 256 Palestinians killed, including 66 children, by unrelenting Israeli airstrikes in and around densely packed urban areas of Gaza.

On the Israeli side at least a dozen were killed, including two children, after Hamas fired hundreds of rockets.