Hezbollah’s secretary general said the current crisis in Lebanon is a sign of a war waged against the resistance front, which is being led by the US embassy and its ambassador in Beirut. 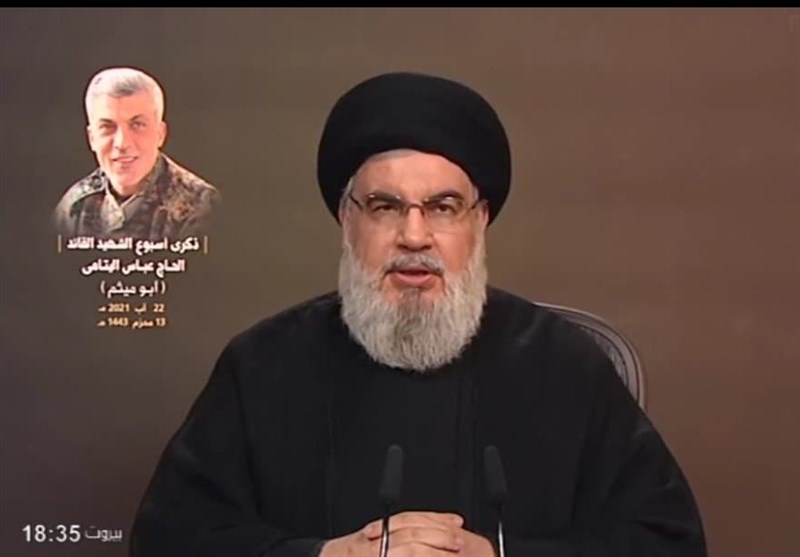 “A war has started against the resistance and all true national forces, and is being led by the US embassy in Beirut. All (US) ambassadors, who have arrived since 2005 have been true leaders of those who were engaged in this war against the resistance,” Seyed Hassan Nasrallah said in a televised speech on Sunday, while addressing a ceremony held to commemorate one of the movement’s late members, Haj Abbas al-Yatama, in the city of Hermel.

The Hezbollah leader noted that documents leaked by the whistleblower site WikiLeaks – in addition to other leaked intelligence documents – have attested to this fact.

Pointing out that Lebanon's nationalist groups are truly seeking to see the country’s sovereignty materialized, Nasrallah said the US and other Western countries “have spent tens of billions of dollars to tarnish the image of the resistance, but they have failed.”

The Hezbollah leader stated that the US embassy and its ambassador in Beirut interfere in all Lebanese affairs, such as the appointment of Lebanese officials and decisions made about supply of fuel and oil.

Referring to the opposition of some Lebanese politicians’ with importing fuel from Iran, Nasrallah said certain politicians fear the US more than they fear God.

“They fear that Lebanon would be sanctioned should it buy fuel from Iran,” he said. “They think, out of ignorance, that if this is done, international sanctions would be imposed on Lebanon, which is not true.”

Saying that more fuel ships will arrive in Lebanon soon, the Hezbollah leader noted that they will arrive as long as the crisis persists, because the goal is to “help the entire people of Lebanon and alleviate their pains.”

The Hezbollah chief had already voiced willingness on a number of occasions to import Iran’s oil to counter Lebanon’s dire fuel shortage, in case the government fails to tackle the crisis.

Last week, he asserted that Hezbollah would “definitely” import fuel from Iran, and would do so “in broad daylight, not at night.”

The small Mediterranean country has, since 2019, been paralyzed by a major financial crisis, which has cut the value of its currency by more than 90 percent, eliminated jobs, and made banks freeze accounts.

In his Sunday remarks, Nasrallah explained that Hezbollah does not see itself as a substitute for the Lebanese government in importing gasoline and fuel, but added that at such a critical juncture, the resistance movement is trying to help the government break the black market and find a way out of these dire circumstances.

“Our goal is to break the black market, prevent monopoly and relieve people’s sufferings.”

Nasrallah stressed that the fuel Hezbollah is importing belongs to all the Lebanese, not just Hezbollah or Shias exclusively.

“Some countries have expressed willingness to help us, but their offers have been vetoed by the US,” he noted, adding that the US government has to lift the veto on Lebanon if it really wants to help.

Addressing the US ambassador in Lebanon, Nasrallah said, “if you really seek to help Lebanon, tell your government not to bar other countries from assisting Lebanon. We neither need your initiative, nor your money.”

Just a few hours after Nasrallah’s announcement on the import of Iranian fuel on Thursday, US ambassador to Lebanon Dorothy Shea informed Lebanese President Michel Aoun that the Biden administration will help Lebanon with acquiring Egyptian gas.

Aoun made the announcement on Twitter, saying that ambassador Shea had informed him that negotiations have begun with the World Bank to “secure financing for the Egyptian gas, to repair and strengthen electricity transmission lines, and the required maintenance of gas pipelines.”

No additional details were given about the plan, including when and how the project might be implemented.

Nasrallah on Sunday mocked the plan, saying even if implemented, it could take a year to import gas from Egypt to Lebanon, which should be transferred through the Syrian soil, as the Lebanese people are opposed getting gas coming from the occupied territories.

“The American ambassador sells illusions to the Lebanese,” the Hezbollah chief noted, saying, “These projects need to be negotiated with Syria, and they cannot be accomplished in the cover of darkness.”

However, Nasrallah welcomed any initiative to import gas and electricity from any country, adding that Hezbollah welcomes “the plan (to import) Egypt’s gas and Jordan’s electricity and anything that can help Lebanon.”

“What is important for us is our nation and their problems,” he said, adding, “Many countries can help us a lot but the US prevents them.”

He reiterated that the US veto is the major obstacle preventing such plans.

“After we said we’ll bring oil from Iran, the US ambassador called the president and said they’ll bring fuel and electricity from Egypt and Jordan. We tried this before but failed because of US veto. So this (fuel delivery from Iran) implies breaking the siege on Syria and Lebanon, (and is) a humiliation for the US,” the Hezbollah chief added.