The US Capitol was locked down and inauguration rehearsals interrupted by an “exterior security threat,” as video footage showed smoke rising near the building. However, the fire turned out to be some distance away. 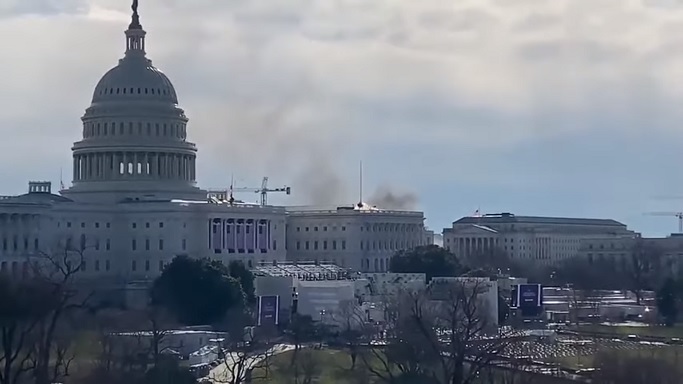 Rehearsals for Joe Biden’s inauguration ceremony were interrupted on Monday by an “exterior security threat,” according to loudspeaker messages heard by witnesses. The nature of the “threat” was not immediately apparent, but the building was quickly locked down, with entry and exit prohibited, and people were urged to seek cover.

U.S. Capitol Police have issued a security warning to everyone inside.

“All buildings within the Capitol Complex: External security threat, no entry or exit is permitted, stay away from exterior windows, doors. If outside, seek cover.” https://t.co/37AxIjyt4F

The DC Fire Department stated afterwards that a fire had broken out on a nearby street, but was quickly extinguished. “This accounts for smoke that many have seen,” the department announced.

All that smoke is coming from a fire under the Interstate 695 overpass in Navy Yard. This video makes it seem close but it's about half a mile south of the Capitol. Burning tent per fire scanner, they've got it under control. https://t.co/obVvph8c4e

Emergency scanners suggested that the fire broke out at a homeless encampment several blocks from the Capitol. Police released a statement saying that the Capitol was locked down out of “an abundance of caution” following the fire. “There is no threat to the public,” the Secret Service announced afterwards.

The Capitol Police then said in a statement that the lockdown had been lifted and the nearby fire contained.

Security at the Capitol has been ramped up ahead of Biden’s inauguration. Biden’s team had already planned a scaled back ceremony, citing the threat of Covid-19, but after the pro-Trump riot at the Capitol earlier this month, surrounding streets have been shut down, security fencing has been erected, and more than 20,000 National Guard soldiers have been deployed in Washington DC – more than the number of US troops deployed in Afghanistan, Iraq and Syria combined