At least six Malian soldiers have been killed in two “complex and simultaneous” attacks in Mali’s conflict-wracked centre, according to the military. 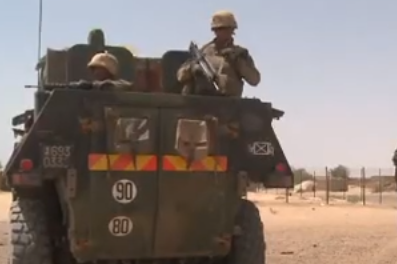 The coordinated assault took place in the villages of Boulkessi and Mondoro in the Mopti region, near the country’s border with Burkina Faso.

“The provisional toll is six dead and 18 wounded” among the soldiers, the army said in a statement, adding that the attacks prompted a military response which left “around 30 dead on the terrorist side”.

Some 40 motorcycles and a large amount of military gear were seized from the attackers, it added.

It was not immediately clear who was behind the attacks.

Mali’s crisis was triggered in 2012 when ethnic Taureg separatists, allied with fighters from an al-Qaeda offshoot, launched a rebellion that took control of Mali’s north. But the armed group fighters swiftly pushed over the Tuareg rebels and seized key northern cities until they were driven out in early 2013 by French troops, together with Malian forces and soldiers from other African countries.

However, groups with linked to ISIL (ISIS) and al-Qaeda have sprung up in Mali’s central and northern regions, regularly carrying out raids against the army and civilians as they jockey for control while exploiting poverty and inflaming tensions between ethnic tensions.

In September 2019, the same army positions struck on Sunday were targeted in one of the deadliest attacks to hit Mali since 2012, with some 50 soldiers killed.

That double attack was later claimed by the Support Group for Islam and Muslims, the main alliance in the Sahel region affiliated with al-Qaeda.

On Thursday, three other Malian soldiers were killed in a bomb blast in the Mondoro area.Mali has received support in its fight against the armed groups from France’s Barkhane force, which numbers 5,100 troops spread across the arid Sahel region.

In addition to Mali, the French force has been fighting armed groups alongside soldiers from Mauritania, Chad, Burkina Faso and Niger.The United Nations has also deployed to Mali its 13,000-strong MINUSMA peacekeeping force, often dubbed as the world body’s “most dangerous” mission, having suffered 146 hostile deaths since it was established in 2013.

The long-running violence has killed thousands of people and left hundreds of thousands displaced, with the country’s centre having become one of the main flashpoints.

The UN’s High Commissioner for Refugees said recently that more than two million people in the wider Sahel had fled their homes due to violence.

The UN Security Council held a meeting earlier this month devoted to Mali’s security crisis, while UN Secretary-General Antonio Guterres has expressed concern about the deteriorating security environment, pointing to the situation in central Mali as particularly worrying.