A convoy of the Turkish Armed Forces came under attack in the eastern countryside of Idlib in Syria’s northwestern region. 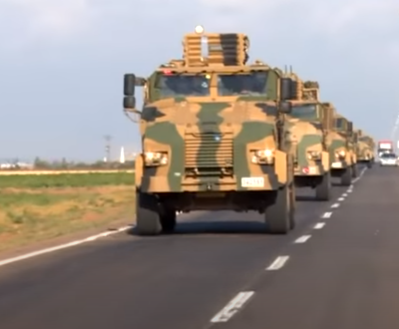 The convoy was hit by an improvised explosive device while passing on a road linking the towns of Ma’arrat Mirin and Ram Hamadan. the attack resulted in a number of injuries.

Opposition sources reported heavy clashes after the attack. Some sources claimed that Syrian militants escorting the Turkish convoy clashed with some of the attack perpetrators.

The Turkish Ministry of National Defense has not commented on the incident, so far. The ministry usually ignores non-fatal attacks on Turkish troops in Syria.

Turkish forces in Greater Idlib were attacked on several occasions over the last few months. In the most recent attack, which took place on May 3, unknown gunmen targeted a Turkish post near the village of Baluon in southern Idlib with rocket-propelled grenades.

Most of the recent attacks on Turkish forces in Greater Idlib were carried out by a group calling itself Saryat Ansar Abu Baker al-Siddiq. The group appears to be linked to al-Qaeda.

Despite the growing threat to its forces in Greater Idlib, the Turkish military maintains over 60 post in the Syrian region. The newest post was built just last month. Turkish forces are supposedly there to observe the ceasefire.