Donald Trump pilloried US President Joe Biden following his first sit-down with his Russian counterpart as commander in chief, insisting the US gained nothing from the meeting, calling it a “good day” for Moscow. 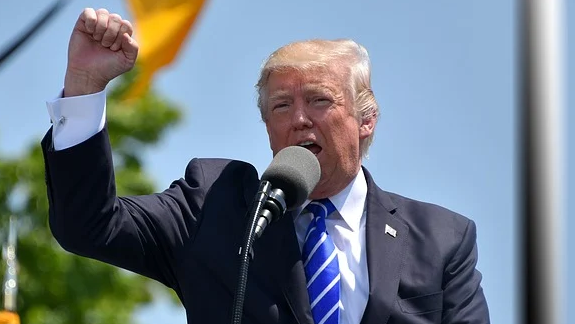 “We didn’t get anything. We gave a very big stage to Russia, and we got nothing,” Trump told Fox’s Sean Hannity on Wednesday night, going on to attack Biden for dropping sanctions on the Nord Stream 2 pipeline project, which is being built by Russia and will transport natural gas into the European Union.

We gave up something that was unbelievably valuable. I stopped the pipeline, Nord Stream, and that pipeline was stopped. It was given back and nothing was gotten for it… I think it was a good day for Russia.

The former president added that Biden’s energy policies would “make Russia so rich,” offering little explanation of how, but also saying, “When I left it was $1.87 a gallon for a gallon of gas, now it is over $3. It’s going to go up to $5, $6, or $7, mark my words, and that is bigger than a tax increase.”

Biden waived sanctions on a German company behind Nord Stream 2 last month, saying they were “counterproductive in terms of our European relations.” Putin announced on June 4 that the first section of the pipeline, which will transport gas from Russia to Germany through the Baltic Sea, has been completed.

While Trump condemned the president’s performance with Putin, he nonetheless told Hannity he wanted him to do well, though could not help but raise the 2020 presidential race even in attempting to be more conciliatory towards his former opponent.

After over three hours of talks with Vladimir Putin in Geneva, Switzerland on Wednesday, Biden told reporters that he will continue to press Russia on issues like cyber-attacks and human rights and, at the same time, will work with Moscow in the fields of arms control and global stability.

“There is no substitute… for a face-to-face dialogue between leaders. None,” Biden said, adding that he and Putin have “a unique responsibility to manage the relationship between two powerful and proud countries.”

Putin struck a similar tone in a separate press conference, saying there is “no hostility” between the countries, despite a myriad of disagreements, and called the meeting “constructive.”

Trump met with Putin in July 2018 in Finland’s capital, Helsinki and was accused by Democrats and some Republicans of kowtowing to the Russian leader.