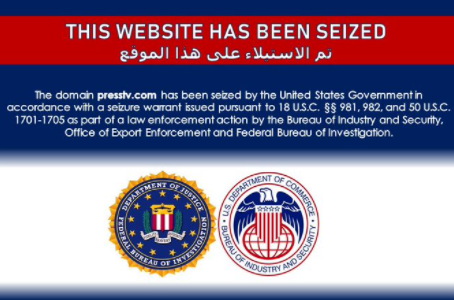 “On Oct. 22, 2020, the Office of Foreign Assets Control (OFAC) designated IRTVU as a Specially Designated National (SDN) for being owned or controlled by the Islamic Revolutionary Guard Corps Quds Force (IRGC). SDNs are prohibited from obtaining services, including website and domain services, in the United States without an OFAC license. OFAC’s announcement explained that components of the government of Iran, to include IRTVU and others like it, disguised as news organizations or media outlets, targeted the United States with disinformation campaigns and malign influence operations.

Thirty-three of the websites seized today were operated by IRTVU. The 33 domains are owned by a United States company. IRTVU did not obtain a license from OFAC prior to utilizing the domain names,” the statement by the US Department of Justice said.

These website seizures were investigated by the U.S. Department of Commerce’s Bureau of Industry and Security, Office of Export Enforcement and the FBI. The National Security Division’s Counterintelligence and Export Control Section prosecuted the seizure.

Visitors to leading Iranian media sites such as Press TV and Al-Alam, the country’s main English language and Arabic language broadcasters, as well as the Al-Masirah TV channel of Yemen’s Houthis, were met with single-page statements on Wednesday, declaring the website “has been seized by the United States Government” accompanied by the seals of the Federal Bureau of Investigation and the US Commerce Department.

In what seems to be a coordinated action, a similar message appears on the websites of Iranian and regional television networks that claims the domains of the websites have been “seized by the United States Government.” pic.twitter.com/JloU56LvpL

Both IRTVU and IRGC have been placed on the US sanctions blacklist, making it illegal for Americans, US companies, and foreign or non-American companies with US subsidiaries to have business with them or their subsidiaries.

The US government also took over the domain name of the news website Palestine Today, which reflects the viewpoints of Gaza-based groups Hamas and Islamic Jihad, redirecting the site to the same notice.

Bahrain’s LuaLua TV, a channel run by opposition groups with offices in London and Beirut, was also seized by the US.

IRIB accused the United States of repressing freedom of expression and joining forces with Israel and Saudi Arabia “to block pro-resistance media outlets exposing the crimes of US allies in the region”.

On the website of their political wing, the Houthis branded the action “American piracy and copyright confiscation.”

“The government of the United States of America is banning the Al-Masirah website without any justification or even prior notice,” they said.

The move comes just days after the election victory of Iran’s hardline judiciary chief, Ebrahim Raisi, known for his hostility to western countries.

Raisi took a hardline position in his first news conference. He ruled out the possibilities of meeting US President Joe Biden or negotiating over Tehran’s ballistic missile programme and support for regional militias – concerns the Biden administration wants to address in future talks.

Press TV, launched in June 2007, is perhaps the most well known of the seized sites. It is the state-run Islamic Republic of Iran Broadcasting’s (IRIB) English-language service.

This also presents a precedent, in which the United States can choose any website, at all, and deem it ‘harmful’, seize it and impose censorship for arbitrary reasons.