US President Joe Biden and Iraqi Prime Minister Mustafa al-Kadhimi agreed to a formal end of the United States’ combat mission in Iraq by the end of 2021. 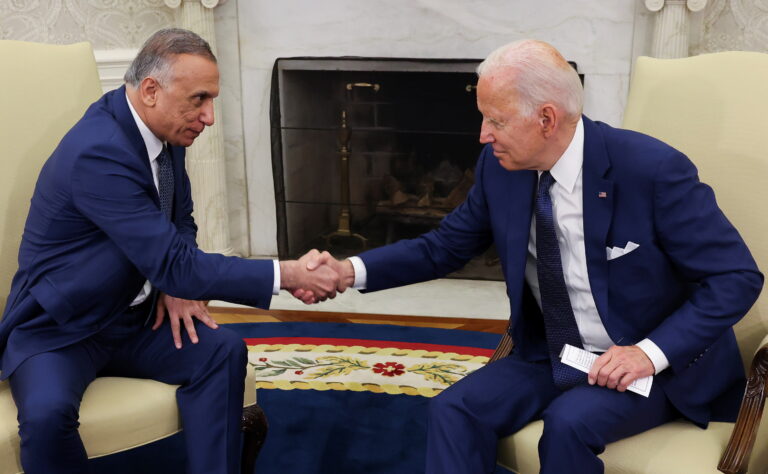 The mission has been going on for longer than 18 years.

In a joint statement issued by the United States and Iraq following technical meetings, the two countries said:

“The security relationship will fully transition to a training, advising, assisting, and intelligence-sharing role, and that there will be no U.S. forces with a combat role in Iraq by December 31, 2021.”

“This is a shift in mission. It is not a removal of our partnership or our presence or our close engagement with Iraqi leaders,” White House press secretary Jen Psaki explained to reporters just prior to the Oval Office meeting.

The United States and Iraq agreed in April to change the American troops’ mission, which had begun in 2015 and focused on training and advisory roles assisting Iraqi security forces, but there was no timeline for completing the transition.

Coupled with Biden’s withdrawal of the last American forces in Afghanistan by the end of August, the president is completing the longest two US missions, that began at the time of US President George W Bush.

Biden and Kadhimi met in the Oval Office for their first face-to-face talks as part of a strategic dialogue between the United States and Iraq.

“Our role in Iraq will be … to be available, to continue to train, to assist, to help and to deal with Isis as it arises, but we’re not going to be, by the end of the year, in a combat mission,” Biden told reporters as he and Kadhimi met.

Still, the fight was far from over and the US would remain, providing training, which it has been doing for a while.

“Nobody is going to declare mission accomplished. The goal is the enduring defeat of Isis,” a senior administration official told reporters ahead of Kadhimi’s visit.

“If you look to where we were, where we had Apache helicopters in combat, when we had US special forces doing regular operations, it’s a significant evolution. So by the end of the year we think we’ll be in a good place to really formally move into an advisory and capacity-building role,” the official said.

As the end of the combat mission was announced, US delivered military hardware to the Kurdish Peshmerga forces, who are a primary fighter against ISIS in Iraq.

Another part of the @CJTFOIR#logisticAids has reached the Peshmerga forces, and these #logisticaids are in the context of a program to eliminate & #defeatISIS by the @CJTFOIR. pic.twitter.com/jXF2vSvT7O

Today, the #ISF took delivery of $25 million of Counter-ISIS Train and Equip Fund equipment for the #defeatdaesh mission. Since 2014, the CTEF program funded by the U.S. has provided over $5 billion of equipment, vehicles, uniforms, stipends, medical supplies, etc.