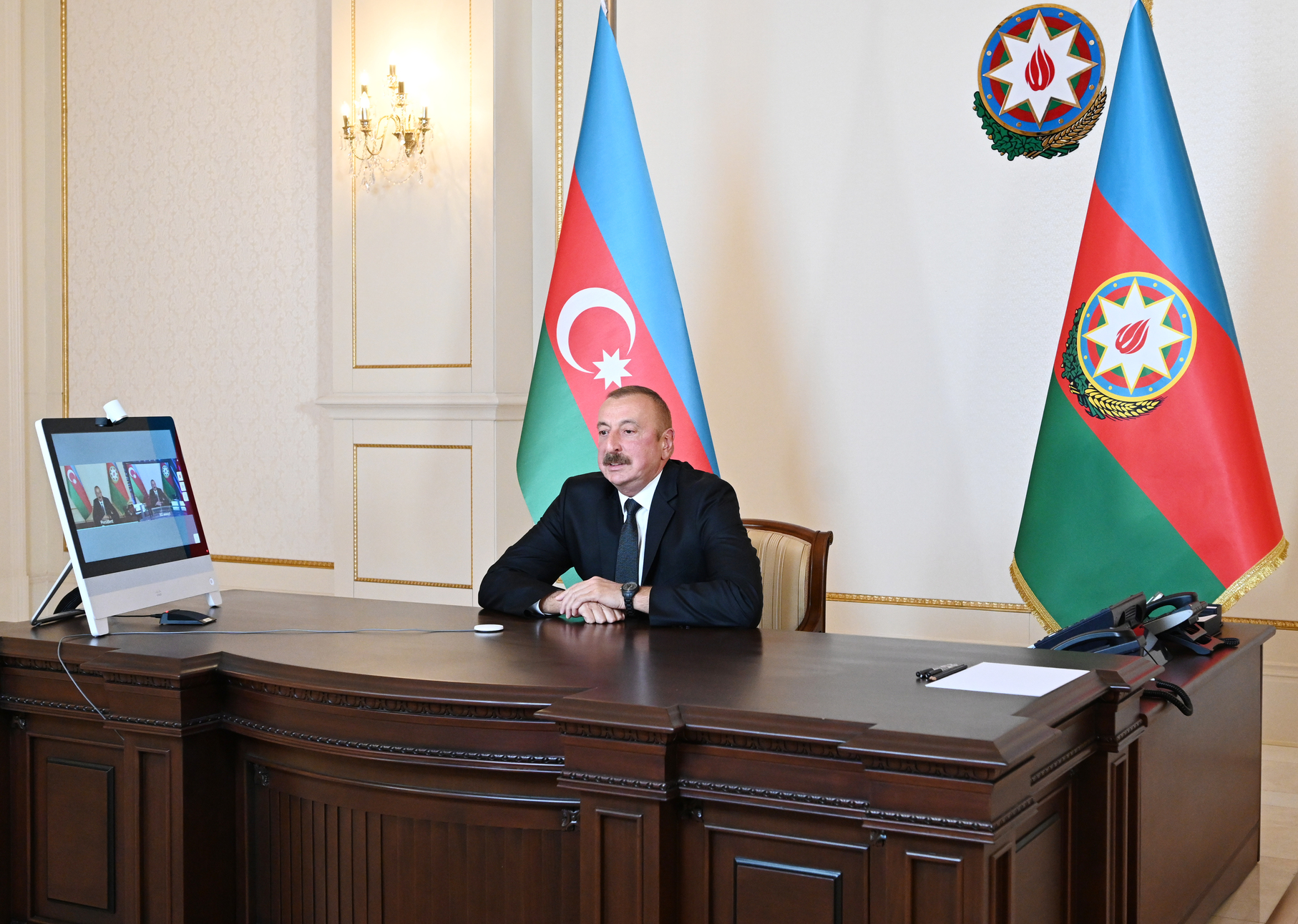 The speech could be viewed and listened to on Aliyev’s facebook page.

Azerbaijan is ready to sign a peace agreement on Nagorno-Karabakh, but “does not see” readiness for similar steps in the statements of the Armenian side, Azerbaijani President Ilham Aliyev said.

“I have already said that we are ready to sign a peace agreement on Karabakh. But we do not see any reciprocal steps from Yerevan. On the contrary, statements by the Armenian Prime Minister and Foreign Minister talk about Azerbaijanophobia, Turkophobia,” he said.

Azerbaijani President Ilham Aliyev said that Baku has no military plans on the border with Armenia.

“You asked about what will happen after the Russian peacekeeping contingent leaves the region. We have borders with Armenia in Tovuz, in Zangalan. Our border troops are in close proximity to the Armenian side. Are there incidents? No. The Armenian army is demoralized; our troops are five meters away. But we have no military plans,” he said.

In his words, questions and plans for the modernization of the Armenian army together with Russia raise questions.

“We conveyed our position to the Russian partners. Why is this being done? Any thoughts of revenge will be severely suppressed,” the President of Azerbaijan said.

He said that the Azerbaijani had been told to fight with dignity and respect. He disregarded all the alleged war crimes and destruction of historic and religious symbols.

“As for our behavior during the war, it was clear from the very beginning that Azerbaijan is waging a war not only of the XXI century, but also a war, so to speak, of a new ethics. When the war began, I immediately ordered my military to behave with dignity and restraint, to do everything possible so that the civilian population does not suffer,” Azerbaijani President Ilham Aliyev said.

Additionally, Aliyev said that he discussed with Russian President Vladimir Putin the information about the discovery of Iskander-M missiles in Karabakh.

“I asked this question because the Azerbaijani people want to know the truth. Our Defense Minister also wrote an official letter to his Russian counterpart. It has already been 9 days, but there is no answer, ” Aliyev said.

Earlier, Azerbaijan reported on the discovery of fragments of Iskander-M missiles, which, according to Baku, were used by Armenia during the escalation of the conflict in Karabakh in the fall of 2020. The fragments of the missiles were shown by representatives of ANAMA.

The agency said that fragments of two missiles were found in the city of Shusha on March 15 during the clearance of the territories from mines, the modification of the missiles is now being clarified, but they did not explain on the basis of what the conclusion was made about their use in the fall of 2020.

“On April 1, I had a telephone conversation with my Russian colleague Vladimir Putin. Usually, as you know, the content of telephone conversations is agreed between the two parties, joint, agreed information is given. But I do not hide anything from the Azerbaijani people and I believe that the Azerbaijani people should to know about everything. We discussed this issue (with Putin – Ed.). On my instructions, the Ministry of Defense of Azerbaijan sent an official letter with photographs, evidence. But so far we have not received any response,” Aliyev said.

At the same time, Aliyev called the statements of official Yerevan about missiles “strange”.

“They either talk about unexploded missiles, then they say that it is a secret. So, they were used after all. We are waiting for an official response from Yerevan. I will tell you more, we have enough information, but we are waiting for official explanations,” he said. Aliev.

Some of his most notable statements throughout the speech were the following:

“Azerbaijan wants peace, but if the Armenian side tries to take revenge, we will completely destroy them.”

“We will remember our history, but we do not have any territorial claims to any countries, including Armenia,” he said.

“Azerbaijan considers Armenians living in the territories controlled by Russian peacekeepers to be its citizens.”