The Iranian Navy’s new domestically built destroyer Sahand and the intelligence-gathering vessel Makran are sailing in the Atlantic Ocean. 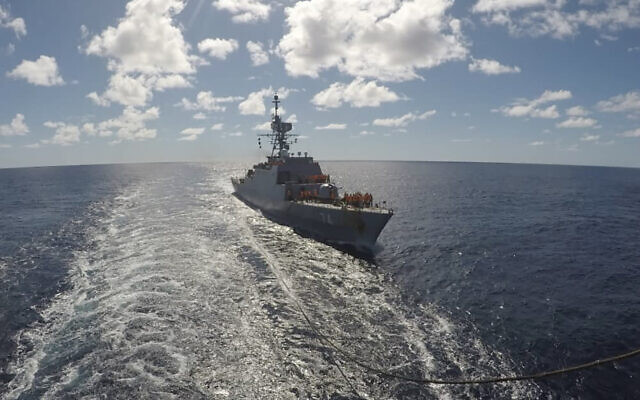 The US maintains that the ships are sailing towards Venezuela, while Tehran hasn’t confirmed its final destination.

Iranian state TV released a short clip of the destroyer cruising through the Atlantic’s seas. The video likely was shot from the Makran, a converted commercial oil tanker with a mobile launch platform for helicopters.

He described their mission as the Iranian navy’s longest and most challenging voyage yet, keeping the mystery alive.

“The Navy is improving its seafaring capacity and proving its long-term durability in unfavorable seas and the Atlantic’s unfavorable weather conditions,” Sayyari said, adding that the warships would not call at any country’s port during the mission.

U.S. State Department spokesman Ned Price would not speculate on what the vessels were carrying, saying only “that if this is an effort to transfer weapons or otherwise to violate its international obligations we would be prepared to respond.”

“We have seen the press reports regarding this movement,” Price said. “We’re prepared to leverage our applicable authorities, including sanctions, against any actor that enables Iran’s ongoing provision of weapons to violent partners into proxies.”

On May 31st, Iranian Foreign Ministry spokesman Saeed Khatibzadeh declined to say where the Makran was going.

The fast-attack craft aboard the Makran are the type that the Islamic Revolutionary Guard Corps uses in its tense encounters with U.S. warships in the Persian Gulf and its narrow mouth, the Strait of Hormuz.

“If the boats are delivered, they may form the core of an asymmetrical warfare force within Venezuela’s armed forces,” the U.S. Naval Institute (USNI) said in an earlier published analysis. “This could be focused on disrupting shipping as a means of countering superior naval forces. Shipping routes to and from the Panama Canal are near the Venezuelan coast.”

On June 10th, US Defense Secretary Lloyd Austin told Senators that he shared their concerns about Iranian Navy ships currently steaming across the Atlantic and possibly transferring weapons to Venezuela.

Sen. Richard Blumenthal, speaking during a Senate Armed Services Committee hearing, said allowing the ships to dock would be “significant” on many levels, including that it would mark the first time Iranian naval vessels had completed the arduous journey across the Atlantic.

“The precedent of allowing Iran to provide weapons to the region causes me great concern,” he said.

Austin said he shares Blumenthal’s concerns, adding that “I am absolutely concerned about the proliferation of weapons, any type of weapons, in our neighborhood.”

Austin declined to answer Blumenthal’s questions about what weapons are on board, saying that he would provide information in a closed session. He added that he had not spoken to any other leaders from countries in the region about the ships’ movements.