At about 3:40 am local time, units of the Azerbaijani Armed Forces attacked Armenian positions located in the north-eastern direction of the Armenian-Azerbaijani border. 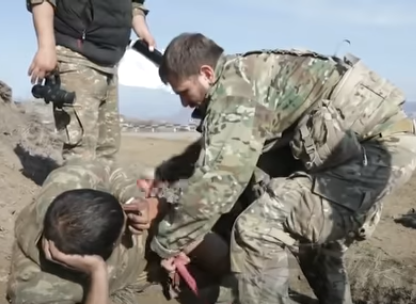 Localized clashes broke out, continued for a few hours.

According to preliminary information, there are losses on both sides as a result of the fighting.

The Armenian Ministry of Defense claimed that as a result of the hostilities that began after the aggression of the Azerbaijani armed forces, three Armenian soldiers were killed and two servicemen were injured on the Armenian side.

Around 9:00 am local time, the Azerbaijani troops were reportedly pushed back, suffering undisclosed losses.

ARM #MoD reports that #Azerbaijani subdivisions that initiated attack on the #Armenian positions have been thrown back suffering losses to their starting positions as of 9.20 a.m.
The shootout continues.
The situation in other sections of the #ARM-#AZ border is stable.

ARM #MoD reports that the #Azerbaijani side launched military actions on the #Armenian borders in the sections from #Sotk to #Verin Shorzha trying to improve positions for advancing.
Military actions are underway with intensive shootout. ARM side reports about 2 wounded.

Earlier, Baku disseminated information about the shelling of the Kelbajar section of the border by the Armenian side, as a result of which two Azerbaijani soldiers were injured.

Azerbaijan’s defence ministry accused Armenian forces of what it called “provocations” in the Kalbajar district and said its army would continue to retaliate, the source reported.

Interfax later reported that Azerbaijan had however accepted a Russian proposal to enforce a ceasefire in the area.

It was supposed to begin at 10:00 am local time, but instead there are reports that Azerbaijan is continuing to violate the ceasefire.

As of 10:30, Azerbaijan continues to violate the ceasefire, which was mediated by Russia. The Ombudsman of Armenia Arman Tatoyan announced this. The human rights official continues to receive appeals from residents of the villages of Sotk, Kut, Azat, Norabak, Nerkin Shorzha, Verin Shorzha, Gegharkunik region, stating that the enemy continues to fire. Kut and Verin Shorzha are especially under fire. The shelling is carried out from small-caliber and large-caliber weapons.

The incident was one of the deadliest since a six-week war between ethnic Armenian forces and Baku over the Nagorno-Karabakh region and surrounding areas ended last year.

On July 20, President Ilham Aliyev of Azerbaijan paid a working visit to Moscow, upon the invitation of his Russian counterpart, Vladimir Putin.

This was the second working visit of the Azerbaijani head of state to Russia this year, following his earlier trip to the Russian capital on January 11, together with Armenian Prime Minister Nikol Pashinian, who has also separately met with President Putin in Moscow in early July.

The agenda of the meeting between the Azerbaijani and Russian presidents, as announced by the Kremlin prior to the visit, on July 19, focused primarily on “the practical aspects of the implementation of the November 9, 2020, and January 11, 2021, agreements of the leaders of Russia, Azerbaijan, and Armenia”.

Evidently, more needs to be done as clashes and losses on both sides are commonplace in the last weeks.

The spokesperson of Turkish President Recep Tayyip Erdogan’s AK party – Ömer Çelik condemned the incident in which an Azerbaijani soldier was killed in the Kalbajar region.

“We condemn this attack in the strongest manner,” he wrote on Twitter.

“An Azerbaijani army serviceman was killed by the enemy’s sniper,” it said.

He criticized not only the policies of Armenia but also underlined that those encouraging Yerevan are also responsible for its aggressive policies.

“Armenia cannot achieve anything from these aggressive policies. Armenia should not be deceived by those encouraging it,” Çelik added, saying that these countries will not stand by Armenia when the necessary response is given to Yerevan.