The outgoing Trump administration has sought to step up pressure against the People's Republic in recent weeks, with new restrictions coming in the wake of a long-running trade war, back-and-forth claims about the origins of the coronavirus, and US concerns about Beijing's internal affairs in Hong Kong, Xinjiang, and the South China Sea. 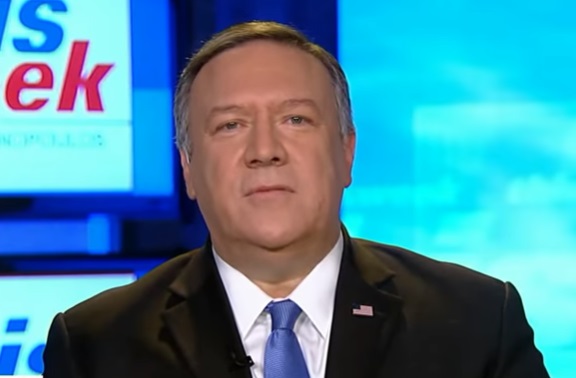 The US State Department has introduced new restrictions against a range of Chinese actors in a bid to "defend" the interests of South China Sea nations and their maritime claims, Secretary of State Mike Pompeo has announced.

"The Department of State is imposing visa restrictions on People's Republic of China (PRC) individuals, including executives of state-owned enterprises and officials of the Chinese Communist Party and the People's Liberation Army Navy, responsible for, or complicit in, either the large-scale reclamation, construction, or militarization of disputed outposts in the South China Sea," Pompeo said in a statement published on Thursday.

The restrictions also include adding China's National Offshore Oil Corporation to Washington's trade blacklist, ostensibly for "its role in the PRC's campaign of coercion against other claimants of an estimated $2.5 trillion in South China Sea oil and gas resources," the secretary added.

Accusing China of sending fishing fleets and energy survey vessels accompanied by military escorts to "operate in waters claimed by Southeast Asian nations" and of "harassing" "claimant state oil and gas development in areas where it has failed to put forth a coherent, lawful maritime claim," Pompeo promised that Washington would "stand with" the region's nations to "defend their sovereign rights and interests."

Beijing has yet to respond to the US decision.

Earlier on Thursday, the US Commerce Department announced new export controls against companies and individuals it says might be supporting Chinese, Russian, Cuban and Venezuelan military-intelligence users. Late on Wednesday, President Trump signed an executive order to strengthen a ban on doing business with firms with alleged ties to the Chinese military.

Before that, Trump signed a separate executive order banning transactions with persons involved with an array of Chinese online payment systems. China expressed its "resolute" opposition to that move, saying it would hurt consumers and blasting the US for its "unreasonable suppression" of Chinese software.

Following the November 2020 election, administration sources told US media that the president was preparing to enact a broad series of harsh policies toward China in his final weeks in office, partly in a bid to limit President-elect Joe Biden's room for manoeuvre vis-a-vis China once he becomes president.

Long-standing China-US tensions under Trump briefly subsided following the January 2020 signing of a "phase one" trade deal between the economic superpowers. As 2020 progressed, however, the China-US economic conflict resumed, and the two nations began to trade accusations about the origins and spread of the coronavirus.

The countries are also engaged in a diplomatic spat over China's policies in Hong Kong and Xinjiang, and a militarised dispute over the South China Sea – a strategic and resource-rich body of water claimed by China and four other nations, plus Taiwan. China claims most of the area for itself, with the US carrying out "freedom of navigation" patrols in the region in defiance of Beijing.