Another round of anti-lockdown riots took place in the Netherlands. This was the third night in a row. 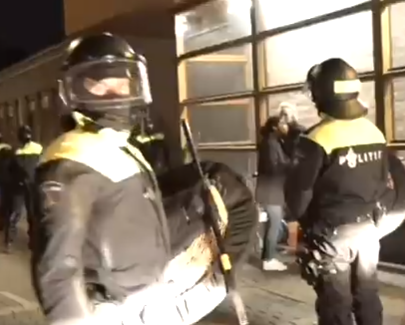 The initial protests were caused by a government decision to implemente a night time curfew. This is the first time curfew is being imposed in the Netherlands since World War Two.

The motivation behind vandalism and other incidents in cities ranging from Rotterdam and Amsterdam to smaller centres of Haarlem, Geleen and Den Bosch was allegedly unclear, with rioters overwhelmingly in their teens.

Police Chief Willem Woelders said on television that 70 arrests had taken place by around 10 pm local time. Water cannons were used against looters in Rotterdam and tear gas used to disperse crowds in Haarlem.

Prime Minister Mark Rutte had earlier on January 25th condemned the riots over the weekend in which anti-lockdown demonstrators attacked police and set fires.

Police said hundreds had been detained over the weekend as rioters threw rocks and in one case knives at police, and burned down a COVID-19 testing station.

Police said they issued more than 5,700 fines for breaking the curfew, which lasts from 9 pm to 4:30 am local time.

“This has nothing to do with protest, this is criminal violence,” Rutte told reporters outside his office in The Hague. Schools and non-essential shops in the Netherlands have been shut since mid-December, following the closure of bars and restaurants two months earlier.

“It’s unacceptable. All normal people will regard this with horror,” Rutte told reporters. “What motivated these people has nothing to do with protesting, it’s criminal violence and we will treat it as such.”

Approximately 300 arrests have been carried out across the country, over all for the three days of protests.

“The riot police have carried out charges and arrests have been made,” Rotterdam’s city council said in a tweet. “There is an urgent request to all to leave the area,” the council added.

Rotterdam police said youths took to the streets “seeking a confrontation with police.” Riot officers attempted to break up the violence and made a number of arrests, before firing tear gas.

“These demonstrations are being hijacked by people who only want one thing and that is to riot,” Hubert Bruls, mayor of the city of Nijmegen and leader of a group of local security organizations said.

Nijmegen was one of a number of towns and cities that issued emergency decrees giving police extra powers to keep people away from certain locations amid reports of possible riots there. At least one store in Nijmegen was shown on Dutch television being boarded up as a precaution.

Police in Eindhoven said Monday they have detained 62 suspects and have launched a large-scale investigation to identify and arrest more.

There were burned cars, just fires on the street, and rioters even blew up a bridge, as can be seen in the video below. The incident took place in Amsterdam: